You are here: Home / Thank you, writing buddies! 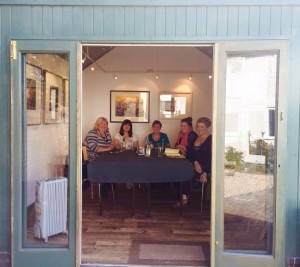 Yours truly, Janice Preston, Morton Gray, Alison May and Lisa Hill in our very grand writing ‘hut’ at the Bevere Gallery.

One of the best things to have come out of taking up writing as a career, is meeting and be-friending other writers.

Writing is a solitary pursuit. It’s you, the laptop, a notebook and a cold cup of coffee most days. That’s if you’re lucky.

At least I have the dogs to keep me company. However, they’re asleep most of the time and snoring. I’ve been desperate enough sometimes to chat to the radio, television and on one memorable occasion, had an in-depth discussion with Henry the Hoover. It was sadly one-sided.

The dogs get me out every day and we tend to meet the same dog walkers to chat to, so that’s great. Once back inside though, with lunch eaten in front of Loose Women (don’t judge) it’s nose to the work in progress. In theory.

When you work on your lonesome, the call of Twitter and Facebook is siren-like. When you only have the wall to talk to (I’ve been known to do that too) it’s great to have a chat online, especially to readers and writers. To make matters worse, writers are expected to spend a certain amount of time using social media and it’s all too easy to get carried away for hours at a time.

Take this afternoon for instance. I’m currently writing something I’m really enthusiastic about. Yesterday I managed to add nearly 3,000 words, which for me, is a result. I want to write the next bit. I love my characters, I know where it’s going and I’m on the first draft which, always gets my writing juices flowing.

So, why did I find every single distraction going to stop me getting on with it today? Okay, the bloke came to service the boiler, the dogs went berserk at next door’s cat bringing home a rabbit, I had to ring my mum and then put some washing in and then I went online …

Except I haven’t. I’ve spent a lot of time retweeting about the Harper Impulse promotion that’s on at the mo’, I prepared the next writer’s cave blog to go up on the website and I began to sort some prizewinners for a competition. All useful things directly connected to my books. But I haven’t added a single word to the WIP!

To go back to the beginning …

One of the best things to have come out of taking up writing as a career, is meeting and be-friending other writers. I now belong to three writing groups and value all of them. It can seem counter-productive to leave the computer and go out to meet people but, trust me, it’s a necessity.

You need your fellow writers when you’re on a roll with something (gives eyes, fingers and the back a break from the hours huddling over the computer) and they are vital if you’re going through a rough patch. At this week’s meeting, procrastination was a hot topic!

It could be seen as just an excuse for lunch and a chat but meeting other writers is balm to the story-telling soul. Who else would understand the fear, the joy, the anxiety – the dilemmas? Who could share the celebrations and the disappointments, except others in the same boat?

So, scoff away, as you see yet another Facebook post of me stuffing my face with quiche or cake, or drinking a large latte. I don’t care. I need my writing buddies. This is a big thank you to all of you out there, who help me along this sometimes joyous, often frustrating and, quite frankly, bizarre way of making a living.

I love my writing buddies!

P.S. Don’t forget to keep your eyes peeled for the last few events for