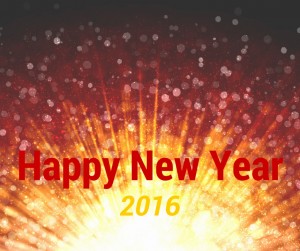 I hope you’ve all had a good Christmas and New Year. I don’t know about your house but this one always feels so much fresher and cleaner when all the cards and decorations have been tidied away. 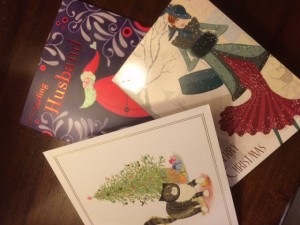 I’m a bit superstitious though, so I’ve left the wreath up on the front door. With all the wind and rain, it looks battered but is just about holding together. A bit like me, after the party season!

And, as the days are still so short, I’ve taken the fairy lights off the front door and twined them around some twiggy things – sorry, I’ve no idea what else to call them! It looks so cheerful, I might leave them there until the hours of daylight increase. And, of course, there’s an elephant. He’s called Timmy Tinkle. Don’t ask! 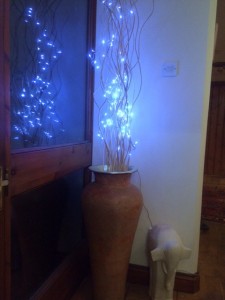 I’m not usually a fan of January but 2016 has, for me, started with two bits of lovely news. 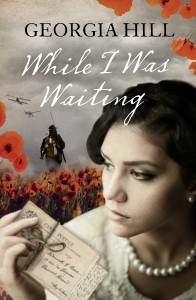 The first was hearing While I Was Waiting has been included in AnnieBookCorner’s Top Ten Books of 2015. I’m absolutely delighted. Ann has been fantastic support and a quote from her review appeared on the back of the paperback, when it came out in September. 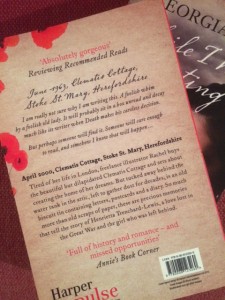 I’d got to know Ann on Facebook (we have doggy interests in common) and only put the Annie from her Book Corner together with the Ann who I swap silly dog pictures with, very recently. I was absolutely delighted with her review – she really seemed to ‘get’ the book.

The other news which brightened the stormy beginning to the year was finding out the book was listed in Morton Gray’s Favourite Reads of 2015. Morton is a wonderfully warm person who I got to know last year. A fellow Romantic Novelists’ Association member and World War 1 enthusiast, she’s also a family history expert. I’m thrilled she liked While I Was Waiting so much and gave it a score of 9 out of 10!

Morton also reviewed the book. I always appreciate readers taking the time and trouble to review. It means so much:

Here’s the link to Morton’s blog. It’s well worth keeping an eye on it, as Morton posts some really interesting stuff:

In both lists I’m among hugely talented writers and am honoured and humbled.

I hope, whatever your hopes and dreams, that you too have a wonderful 2016.