You are here: Home / Brain stretching at the Hay Festival

Brain stretching at the Hay Festival 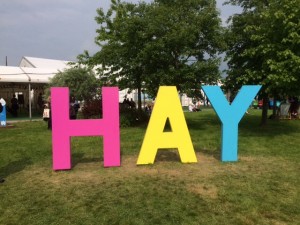 Breaking your souvenir Hay mug the week before you go to the festival doesn’t augur well. Neither does accidentally running over a rabbit on the way. So, being the suspicious kind, it was a nervous drive to Hay on Wye for the annual festival of literature, music and all goodly things.

Thankfully, all went well and parking in the out of town car park and getting the minibus to the festival site went without a hitch. In an amazing coincidence the friendly woman next to me in the queue happened to be a Facebook friend. That’s enough of a coincidence but Marilyn Forsyth also happens to be an Australian romance writer, published by MIRA and on holiday from her home near Sydney. Weird and wonderful! If you like romantic tales of hunky Aussie farmers, check out her book, The Farmer’s Perfect Match. Here’s the link to Marilyn’s author page: 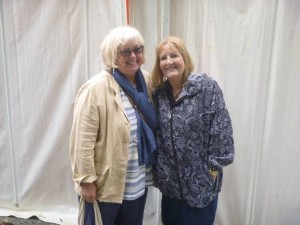 This year I’d booked for Barbara Erskine in the morning and Andrew Davies at 7pm so thought I may as well stay all day. I squeezed in Emma Bridgewater talking about setting up her iconic pottery factory, Ursula Martin on Ada Lovelace and an hour on Coleridge in Wales before staggering into Andrew Davies’ talk. You need a certain amount of mental stamina for these events.

The festival site itself is a community of tents, linked by boarded walkways, with a grassy open space in the middle. There’s a food hall, some very upmarket portaloos, coffee shops and cafes, restaurants and summer houses, shops and exhibitions and an extensive bookshop. In other words, it’s a complete little town with everything you need. On the day I went it was warm and sunny and the deckchairs were fully occupied. There’s something inspiring about being surrounded by people engrossed in a book or indulging in a heated discussion about one. Especially so in a world which sometimes feels obsessed with shallow celebrity. This year the tents were decorated with these gorgeous illustrations created by students from Hereford College of Arts. This one appealed to the romance writer in me. 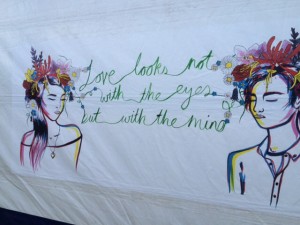 The festival is really friendly. I went on my own but found myself talking to people everywhere. Everyone working there is great too. Having the car park attendant wish me an enjoyable day started me off in a really good mood, even if I still had pangs of guilt over the rabbit.

Hearing Barbara Erskine talk about her new book in the town in which it’s set was magical. Getting hold of a pre-published copy and having it signed was also special. I can’t wait to dive in. 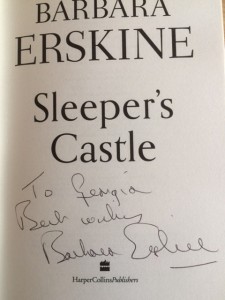 I’ve heard Barbara talk on a number of occasions and she’s compelling. Fate has a way of throwing her characters in her way, she says. She writes the books she does because the past is still there – and linked to modern life. Her new book, Sleeper’s Castle, is set in a house with a long reputation of enabling people who live there to connect vividly with their dreams. And this is a bridge to the past and to Owain Glyndwr. 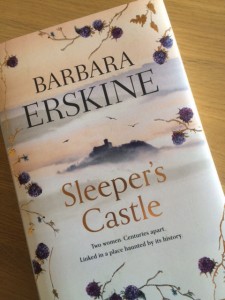 It was news to me that there is an unspoken rule of fiction that you don’t write about dreams (according to Peter Florence who was interviewing). Sigh. Better scrap that next book then …

Emma Bridgewater, a supremely confident and articulate speaker, was next. She told us how the factory started up as she couldn’t find the right teacup and saucer as a present for her mother. She wanted something pretty, casual-looking and something that would fit into the eating-in-the-kitchen, warmed-by-the-Aga lifestyle to which so many of us aspire. She is absolutely certain of the market she aims for and this translates into her huge successes. She accepts her pottery is expensive but feels that good things, made well cost more and are worth it. The factory now employs 270 in Stoke on Trent, a town decimated of its china industry. I bought a new Hay Festival mug, tried not to wince at the price and was smug in that I was doing my bit to support British industry! 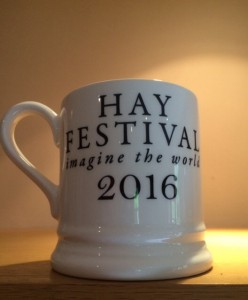 Andrew Davies was all I’d hoped for. Funny, with a dry wit and unpretentious in a literary world sometimes guilty of self-indulgence. I liked his ‘just get on with it’ attitude. 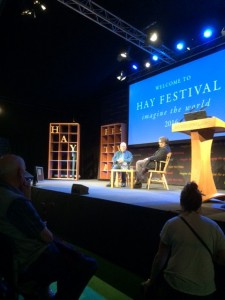 The interview was based around his recent adaptation of War and Peace. The inevitable question was asked: how do you begin to adapt such a big book into a six part television series? Andrew explained he started by questioning who he really cared about in the book, deciding that Andre, Pierre and Natasha were the ones he wanted to build it around. He’s unique in the world of television script writing in that he has a great deal of influence in casting, what music is used, how many episodes are needed and admitted that it maybe could have done with an hour more.

He gave some useful notes for writers of all types: drop anything which doesn’t move the plot on and examine how Tolstoy lets us experience epic themes by letting us into the personal experiences of the characters we have come to love. Therefore the huge themes of war and love can make sense to us. Epic through the personal.

On a slightly more superficial level, a couple of extracts from the TV series were shown and it was a visceral pleasure to watch the ballroom scene, where Andre and Natasha dance and begin to fall in love – on a big screen.

The surprise highlight of the day for me was Professor Ursula Martin’s talk on Ada Lovelace. I knew Byron had had a daughter and vaguely knew she was an intellectual but that was the extent of my knowledge. To be honest, the mathematical and computer talk was way above my head and floating off into the ether but Professor Martin was extraordinary. Funny, witty, strenuously intellectual with an enviable sense of timing. She was captivating.

Her subject, Ada Lovelace, squeezed in a hell of a lot in her short life. Dead by 37, she was an astronomer, had interests in mesmerism and photography, had been presented at court, had married and borne three children. In her mid-twenties she wrote a paper for Charles Babbage’s calculating machine which leads many to give her the moniker of ‘the first programmer.’ You wonder what she would have achieved had she not been hampered by the mores of her time.

I love having my brain stretched and given a good work out. I can think of no better place to do it. The Hay Festival runs until 5th June. Get yourself down there. Linky thing here: