You are here: Home / Choc Lit on Tour 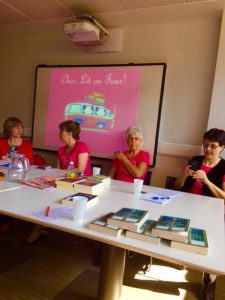 Saturday saw me heading into Exeter to meet writerly peeps of a chocolate variety. I was going to the very first gig on the Choc Lit tour.

I’d met (and gelled with) Sally who is SalsWorldofBooks at a previous event. As we could get the same train, we travelled in together. Along with an awful lot of Exeter rugby fans going in for the big game against Bristol. I think. You’ll have to excuse my lack of knowledge, I’m a footie fan.

Sally took me to Gandy Street for a coffee first. Each time I go into Exeter, I discover more delights. It’s always such a buzzy city, probably helped along by the large student population. And rugby fans. Gandy Street, so Sally told me, is probably the street JK Rowling had in mind for Diagon Alley. I can see why. It’s one of those secretive, medieval thoroughfares at which cathedral cities excel. It has a tempting selection of those ‘We Saw You Coming’ type shops, and cafes and bars. It’s lovely! I will be back to sample more. 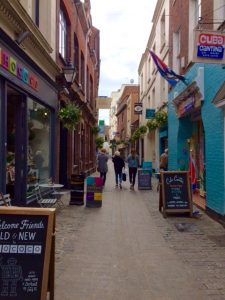 The Choc Lit event was held in Exeter Library – another impressive part of the city, although a bit more steel and concrete than Gandy Street. 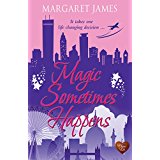 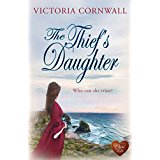 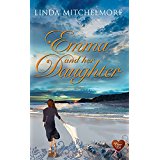 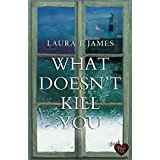 I went along to Laura’s book signing in Dorchester a few weeks ago. I’m slightly worried she thinks I’m stalking her. They talked through their writing journeys – all different – all fascinating, why they write, what inspires them, how they work. Margaret revealed which book she most wanted to have written and which inspired her the most: an idea I might steal for some guest blogs. Laura led a discussion on social media and marketing which created a lively discussion. I was probably a bit gobby. Too much coffee and chocolate probably.

There was a chance to pitch your novel to Lou from the Choc Lit team – something that is so rare outside of London or writing conferences that it was an opportunity too good to miss.

There was a quiz! I came second and won a book and some chocolate. There were goody bags! More books. More chocolate. (I think Choc Lit might be onto something with this chocolate-and-books combo malarkey). It was a fun afternoon and it’s always a pleasure to be with writers and talk writing. 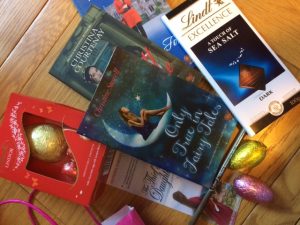 Thanks to Choc Lit and especially to Margaret, Victoria, Linda and Laura.

Choc Lit are taking this nationwide. Check out their website for other dates:

You can find reviews and all things bookish on Sally’s lovely blog: