You are here: Home / Night soil, lice and all things nice 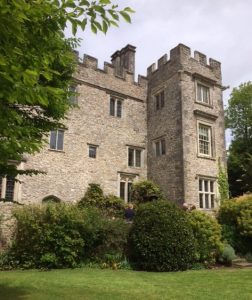 You know me, can’t pass by a museum or historical house – or as my grandmother used to say, in fine Mrs Malaprop tradition, ‘hysterical’ house.

The National Trust has its fair share of grand hysterical houses and magnificent gardens but, every now and again, you come across a more unassuming little gem.

Shute Barton is hidden away in the verdant hills near Axminster in east Devon. Managed as a holiday let, it’s open to the public for only four weekends a year when visitors are treated to a guided tour.

I drive past its Tudor gateway frequently and have always wondered what secrets lay behind. In an attempt to write up my recent visit, I’ve tried to make it as chronological as possible but, like the house itself, it’s ended up being a bit of a historic hotchpotch!

A rare example of a non-fortified manor house, it’s believed there has been some kind of dwelling on the site from the 12th century, possibly even before. King John granted the estate to a family whose daughter revelled in the name Hawyse. Now, I’d always thought it pronounced ‘How-ise’ but our lovely guide assured us it was said as ‘Horse.’ In this age of celebrity baby names such as Apple and Bear, maybe it’s one which should be revived!

Much of what can be seen today at Shute dates back to 1380 when Sir William Bonville built himself a medieval hall house. It later became an important Elizabethan estate but was largely abandoned in the 18th century. 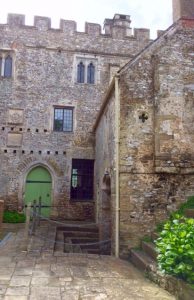 A particularly vicious local rivalry during the Wars of the Roses saw all male members of the Bonville family killed in battle or executed afterwards. It left Cecily Bonville, then under a year old, as heir. One of the wealthiest heirs in the land, she became a ward of court and, as such, a useful commodity. She was married off to Thomas Grey, 1st Marquess of Dorset, at the tender age of fourteen.

Now, those of you who are into history might have your antennae quivering. Cecily and Thomas went on to have fifteen children. Some records say fourteen (I would imagine, once you’re past the tenth, you stop counting).Unusually and more importantly, eleven survived to adulthood. And yes, you’ve guessed it, Cecily’s descendent, her great-granddaughter in fact, was Lady Jane Grey, the ill-fated queen of a nine day reign.

One story has it that she haunts the house today. Another, is that it’s the ghost of a young girl, a member of the staunchly Royalist Pole family. This tale dates from the English Civil War. While walking in the garden, she was set upon by Parliamentarians and hung from a tree.

I’m not a particularly fey person but, even before I’d read up on possible hauntings, I’d felt a distinct vibe in the house, especially in the 15th century wood-panelled room. Once possibly the estate manager’s rooms, it’s now a very beautiful bedroom – light but eerie. 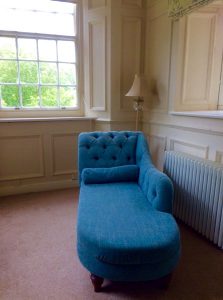 During Cecily Bonville’s time Shute became a very grand house. What we can see today is just a tiny remnant of what was there in the 15th century. Visitors are able to tour what was once the great medieval hall and a few other rooms but mostly the history is hidden under the 21st century trappings needed for a holiday let. 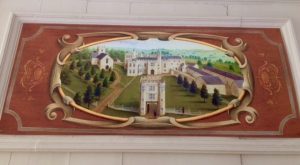 Walking in to what is now a truncated version of the medieval great hall, you are confronted by an enormous fireplace. At 22 feet long, it’s rumoured to be the biggest Elizabethan fireplace in England, rivalling even the one at Hampton Court. Although, apparently Hampton Court deny this fact! 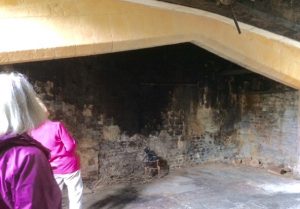 Other early parts of the house are still intact, including the magnificent 15th century roof. The photograph doesn’t do it justice. Built from chestnut rather than oak (all the better to withstand the ravages of woodworm) it’s extraordinary. 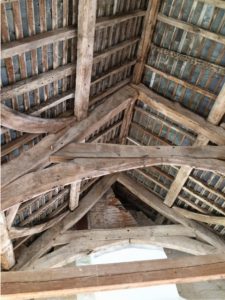 In one corner of this room is the medieval garderobe, with its chute running down the outside of the house. Servants carried away the ‘night soil’ through a tunnel, thus shielding members of the household from the less savoury aspects of their life. 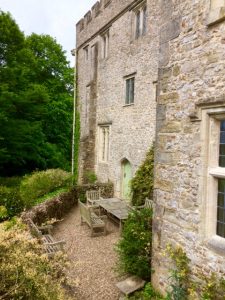 The garderobe is directly above the fireplace and the hole cut into the chimney is to allow smoke to fumigate the clothes hung in there and rid them of pests like lice. Are you now a) appreciating modern plumbing and b) starting to scratch? I am! 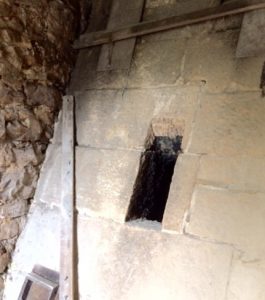 As we all know, the world of Tudor politics was a murky one. Involvement in the botched attempt to put Lady Jane Grey on the throne lost the family the grand Shute house and its estate. Bloody Mary (the queen not the cocktail) promptly granted it to Sir William Petre, her secretary of state. Although he never lived in the house, he commissioned a detailed survey. Only discovered in the late 19th century, it’s why so much is known of Shute’s Tudor magnificence.

It was acquired by the Pole family in 1560. Amazingly, their descendents were still living in the house until a few years ago. New money came into the family – now de la Pole – and a spanking new house, with all Georgian mod-cons, was required. A Palladian villa was built nearby and Old Shute was left to decay. Restored in the mid-fifties, the National Trust took over its management for holiday accommodation. The magnificent (and narrow, only just got the car through) Tudor gatehouse is also a holiday let but is owned by the Landmark Trust.

On our tour, we passed through a curiously tiny door within a much larger frame. Apparently the original is in Taunton. Not the Somerset town but one a little further away, in Massachusetts. Spinster Elizabeth Pole, for reasons best known to herself, made the perilous journey to the shores of America in 1633 and is known for establishing the settlement of Taunton, Massachusetts, in 1639. Visitors from the USA returned (but possibly not on the ship the Speedwell, which is how Elizabeth travelled) and bought the original door. It went with them to reside in the town’s museum. Doubt if it fitted into hand luggage. 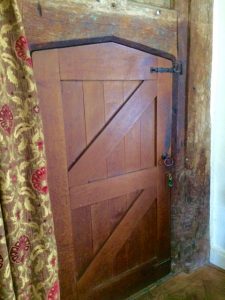 Most of us know a little about our country’s history. We know dates, facts and figures, about wars and kings and queens. What visiting somewhere like Shute does for me is to raise questions about the people who lived there.

Why, for instance, was Cecily Bonville buried in Warwickshire when she loved Shute so much? Why did she marry a second time, to a much younger man? Why did canny politician Petre have a survey done and not bother to live in the house? How did the night soil men feel about collecting excrement and having to scurry away into a tunnel with it? What was it like for the farming family who lived in two rooms in Shute (when it became Shute Barton, Barton meaning farm) in the forties and who used the great Elizabethan fireplace for cooking and heating?

Oh, for a time-machine to travel back and ask them. And then be able to nip back and use 21st century sanitary arrangements.

A visit to Shute Barton comes highly recommended, especially if you’re a history enthusiast. Such a rich history for what, at first, appears to be a very humble house.

Check the National Trust website for details of the next open weekend.