You are here: Home / Sharon Black: Going Against Type 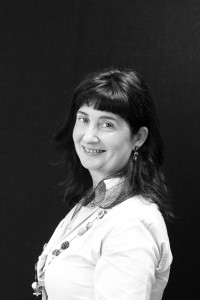 I’ve got Sharon Black guesting on the blog today. She’s a journalist who also writes for Tirgearr Publishers.

Hi Sharon, thanks for coming on. Tell us a little about your novel, Going Against Type. It’s a great title!

Some would say Charlotte ‘Charlie’ Regan has it all. Beautiful, smart, athletic and a great job working as a journalist – in the almost exclusively male sports department. But Charlotte is not quite as sure as she seems. Recently split from her overbearing boyfriend, she escapes for weekends, surfing in the Atlantic, and spends her free nights watching sports, roaring at the TV.

Derry Cullinane is a fashion writer, gossip columnist and sophisticated man-about-town. The go-to guy for any woman seeking expert advice on what fabulous outfit to wear for any given occasion. He’s also tall, dark, good looking – and straight! So what’s the snag? He has a track record of dating glamorous, vain and shallow women.

Charlie gets an opportunity to write a new column under the pen name Side Swipe, but is soon drawn into a war of words and wit with a rival paper’s columnist The Squire – and their verbal fireworks get readers and editors talking. Yet neither Charlie nor Derry knows just whom the opponent is…

When Charlotte and Derry meet at the Races, the attraction is instant. As their relationship develops, so much more proves at stake, than protecting their alter egos. But a blunder puts Charlotte’s job in jeopardy just as Derry’s past makes front page, and Charlotte begins to doubt her feelings.

When Side Swipe and The Squire are finally forced to reveal themselves, will they revert to type – or confound everyone’s expectations?

Ooh, sounds really interesting! Can you tell us a little about the inspiration behind the book?

I was a huge fan of the old Hollywood films of the 1940s, which ran on TV when I was growing up. In particular, Spencer Tracey and Katharine Hepburn were my idols. One film they made together was ‘Woman of the Year’, and the plot for Going Against Type was loosely inspired by that wonderful film. What I did was to turn the stereotypes on their head. So my female columnist is a sports reporter – and my hero (her anonymous rival) is a fashion writer. And of course, I dragged it into modern day Dublin.

I trained as a journalist myself, and worked as a features writer with The Evening Herald, and later, The Irish Examiner. So I know a bit about the world in which I set my story. 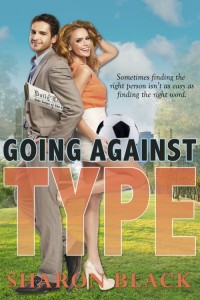 Those old films are great, aren’t they? And, another goodie – to whet your reading appetite, Sharon has kindly given us an excerpt from the book:

‘Ow!’ Charlotte yelled as the man in front of her stepped back heavily on her foot. He turned quickly, scowling down at her from under a Panama hat. Realizing she was clutching her foot in pain, his face cleared to concern.

‘I’m terribly sorry. Were you standing very close to me? Is your foot all right?’

Charlotte glared at him in disbelief.

‘Yes, that must have been it. I got under your feet! It was completely my fault,’ she countered, massaging her foot. He burst out laughing and regarded her small leather brogues.

‘You have very small feet, don’t you? I really am sorry, I didn’t see you at all.’

What was so damned funny? Charlotte drew herself up to her full five foot, three inches and continued to glare up at Panama Hat Man. He had to be at least a foot taller than her.

‘You’re as clumsy as an elephant,’ Charlotte replied indignantly.

‘Actually, elephants aren’t that clumsy.’ The man grinned as he swept off his Panama hat to reveal a shock of black, slightly curling hair.

‘Please accept my deepest apologies.’ He arched one dark eyebrow. ‘Any tips for the next race?’ Charlotte hesitated.

‘I’m not sure if you should listen to me…’

‘On the contrary,’ he murmured, a faint Cork accent filtering through, ‘Race looks wide open.’

‘What’s your bet?’ shouted the bookie, and Charlotte suddenly realized they’d reached the top of the queue. She nursed her sore foot as Mr Panama Hat muttered to the bookie, before taking his docket and turning briefly around.

‘Wish me luck!’ he said, before disappearing to view the race.

‘You betting miss?’ the bookie said.

‘Um, sure. A tenner on Green Velvet – to win,’ Charlotte decided suddenly, still thrown by the encounter. Dammit, what had she tipped for this race? She couldn’t remember if it was Green Velvet. But the bookie was waiting. She handed over her money. Once the horses were called to starters orders, the bookies’ pitch cleared fast. Charlotte pulled out a notebook and asked the bookmaker a few questions about how the festival was going. The sun disappeared and she pushed her sunglasses on top of her head. She thanked the bookie and glanced around. No sign of the good looking Panama Hat Man. Good looking? She’d bet her last cent that he bloody knew it too. Who the hell wore Panama hats in Ireland? It had shaded those brown eyes…so get yourself a dog if you like brown eyes, Charlotte. She gave herself a mental shake.

‘Yes!’Charlotte shouted, scrambling up on to the bookies’ stand to watch the horses gallop to the finish line. ‘Come on Green Velvet!’

‘Penny Farthing and Green Velvet, stride for stride, it must be a photo. I can’t separate them but I think Lucky Dip takes third. Green Velvet may have got it in the last stride….It’s Green Velvet in first place. Green Velvet wins, followed by Penny Farthing. And Lucky Dip takes third.’ Charlotte grinned delightedly at the bookie as she jumped down off the stand. As an afterthought, she pulled out her column, searching for her tips. There it was: her top tip for that race had been Margin of Error. The horse had been badly beaten. She bit her lip and shrugged philosophically. Nobody got it right all the time.

‘So, did you get lucky?’ a deep voice drawled. Charlotte spun to find Mr Panama Hat grinning down at her. Bloody hell, she thought, smiling back despite herself. Any other man she knew would look utterly ridiculous in what seemed to be a tailor made, striped linen jacket and trousers, combined with that damned hat. But he carried it off with a self-confidence that bordered on swagger.

‘Yes actually, I did,’ she admitted, still smiling. ‘What about you?’ He grimaced.

‘I lost. My own fault. I took a flier on somebody else’s tip.’ Charlotte grinned sympathetically.

‘I read some bloody sports columnist from Ireland Today. Had a few winners earlier this week. As I said, it’s my own fault. I never normally bother with racing tips. Whoever it is, he obviously doesn’t know a horse from a three-legged stool.’ Charlotte swallowed hard.

‘So how much did you lose?’ she managed, trying to sound casual.

To find out more about Sharon, follow the links.

Thanks so much for being my guest, Sharon. Good luck with the book!