You are here: Home / Black dye, riches and tragedy. 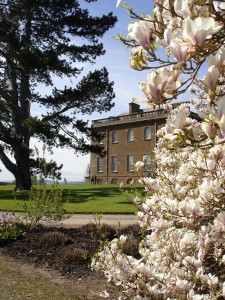 I’m lucky to have many fascinating National Trust houses within easy distance and one of my favourites is Berrington Hall in Herefordshire.
Berrington is a pretty 18th century house, with Capability Brown designed grounds, set amongst beautiful rolling hills and commanding impressive views. I visit frequently and always find something new.

My most recent trip was for research for my next book, partly set in World War 1. In one of the oval bedrooms, the Trust has created an ‘experience room’, designed to reflect the ambience of an evening in the war years, where you can sit, read archive materials, or simply soak up the atmosphere. It was very moving.

The Rodney family, having lived at Berrington for 95 years, sold the house to a Frederick Cawley MP, a wealthy Lancashire cotton finisher. He happened to own the patent for a pure black dye. With the death of Queen Victoria in 1901, sales of black crepe rocketed and made Cawley an incredibly rich man. Thirteen years later, the wholesale slaughter in World War 1 again created huge demand for mourning clothes but this was to prove a tragically ironic success for the Cawley family.

Frederick Cawley, wife and four sons moved into Berrington and immediately set about a programme of refurbishment and improvement. The Victorian fireplaces were replaced with more appropriate Georgian ones and the house had electricity supplied by a generator. Progress indeed – some parts of Herefordshire still lacked electricity as late as the 1950s!

Success seemed assured when Frederick Cawley was made a baronet in 1906.

However, with the outbreak of war, tragedy struck the family. Only a few months into the war, the third son Stephen died in action at Nery during the retreat from Mons. He was 34 and by all accounts a brilliant young officer. The family, still reeling from the shock, had barely begun to recover when the following year the second son Harold died at Gallipoli. But the horror continued, with the death of the youngest son Oswald in 1918, just three months before the Armistice.

You can hardly bear to think how a mother ever recovers from losing three of her children, even when given in service of the country. And indeed, members of the family recall that Lady Cawley was never really the same after this triple blow.

While sat in the fug and gloom of the ‘experience room,’ it was interesting to read the accounts from fellow officers of how the men died. They speak of a ‘wonderful strength of mind’, of ‘marvellous nerve’, of a ‘glorious and gallant death’ when the truth must have been far less romantic. Perhaps some comfort though, to a mother grieving for three sons she pushed out into the world and which rewarded her with death on a monumentally mechanised and industrial scale.