The popular writer’s cave feature is back after its summer break. Today we’re joined by historical novelist Becky Lower. Over to you, Becky, tell us all about your writing space …

One of the reasons I bought a four-bedroom house (I’m single, no kids) was for the downstairs room with two doors on it. I figured it would be awkward with the two doors as a bedroom, but would work really well as an office. And for years I’d wanted a dedicated space for an office. I had purchased a beautiful Hooker desk some years ago. It has two shelves in the front and a beautiful inlay pattern on the top. It didn’t fit well into the space I was in at the time, but I knew someday I’d have a real office and it would fit beautifully into the space. This house offered that space, and I bought the house in part because of that awkward first-floor room. 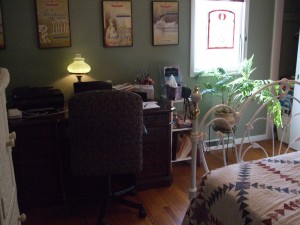 Unfortunately, six years later, things have changed. Due to some medical issues, I can’t do stairs as easily as before, so we decided the best thing to do was to move the bed downstairs, and the only room that worked was the office. The writing cave has now become a cluttered, crowded room. I’m in an office/bedroom, with my lovely Hooker desk shoved into a corner again. 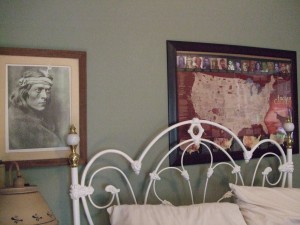 I kept the framed covers of my first four books on the wall, and the wall over the bed still has my map of America which shows which Indian tribes were where. There’s my haunting picture of a Zuni Governor that I found in an antique mall in New England. One look at those eyes and I couldn’t leave him in that dusty upstairs room. 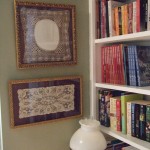 On the side of the room where the built-in bookcase is I have framed some of my favorite antique lace. Everywhere I look, there are still images that inspire me in my writing. Even in the crowded space that my office has become, I can still find the creativity I need to put words on the screen. And there’s still room for Mary, my little dog, who is my constant companion while I work. 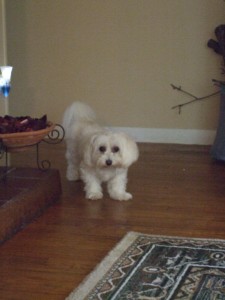 My most recent novel, A Widow’s Salvation, is about one of the first American Civil War Widows. She’s a member of my large Fitzpatrick family, whose love lives have been chronicled in the Cotillion Ball Series. There are nine children total, and this is Book 8. Each one I write becomes my favorite for the moment, but this one really occupies a soft spot in my heart. It’s the first historical book I’ve written where the heroine is older, has children and responsibilities, and can’t go gallivanting off to rallies for women’s rights at the drop of a hat. 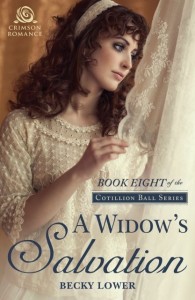 In 1862 America, the Civil War has raged for twelve months. Pepper Fitzpatrick Brown’s heart was broken when her husband died with the first volley at Manassas. Now she’s a widow raising three young boys and plans to honor his sacrifice by volunteering at the army hospital.

When Colonel Elijah Williams can grab a few minutes to nap between his duties as head surgeon at MacDougall Army Hospital in the Bronx, his sleep is invaded with nightmares of the atrocities he’s seen. His life has narrowed to nothing but the bloody war … until he meets Pepper Brown. But her father is concerned Elijah doesn’t have the best intentions, and Pepper is fearful of loving and losing again.

It’s hard to find happiness in a war-torn United States, but these two stand a fighting chance—if they can save what’s left of their hearts.

And here’s where you can buy Becky’s book:

And you can find out more about Becky here:

Thanks so much for stopping by Becky!