You are here: Home / Annie Whitehead: Queen of her Red Room

We’ve got historical writer Annie Whitehead sharing her cave today. And a very civilized one it is too! Tell us all about it, Annie:

My cave didn’t exist when we bought the house, but the arrival of baby #3 rendered the kitchen table too small for purpose, so we built a dining room. Actually, In those early days it was more of a feeding room; dining sounds a little sophisticated for what was going on at the time. (We’d painted it with wipe-clean paint, in a shade as close as we could get to Puree Splatter, so that the stains didn’t show too much). Then one Sunday, Mr W took the children to his mother’s for the afternoon. I’d had three kids in under four years and suddenly, weirdly, I was on my own. 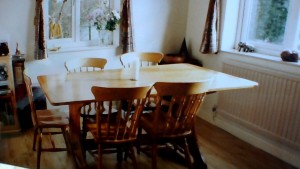 I began to write; something I’d not done since I was a graduate, renting a room in a family house and with some spare time – when I wasn’t looking after their incontinent standard poodle, tabby cat with kidney disease, and rescue alsatian with abandonment issues and a penchant for chewing yucca plant leaves.

At first, I simply wrote what was on my mind. These scribbles became a series of letters to my mother, which, while I did post them, were written with the hope/intention that one day they would reach a wider audience. My “Dear Mum” letters charted the exploits of The Boy, Middle Daughter and The Youngest and chronicled such activities as hanging toys upside down by their ankles, gibbet style, the perils of becoming a spectator on the pitch when the pitch in question happens to be a table-football (foosball) game, and the efficacy of “big knickers.”

The Youngest started school, and, though I had three part time jobs, I managed to jot down, in long-hand, the draft for what would become my first novel. I finished the book, and it was rejected by everyone I sent it to. I knew I could write, but I realised I’d chosen the wrong subject. And with marketability in mind, I began what would become To Be a Queen, which was picked up by an agent. 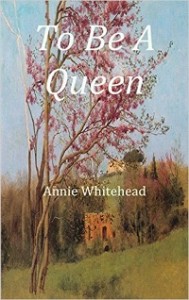 My cave still served throughout this time as a dining room – we always sat down to family meals, even if that meant eating at 4.30 in order to get to Brownies, Cubs, Rainbows or trampolining – and gradually became a music room too, to indulge the children’s hobbies and my burgeoning career as a pre-school music teacher. But I began to move furniture around and recycled some shelves from Mr W’s office further down the house. These shelves now house my notebooks and folders. 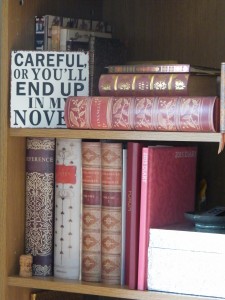 The notice about being careful or ending up in my novel was a present from my son. The decor prompted me to call it the Red Room, until my (now 20-year-old) daughter advised me that thanks to recent publications by EL James, those words carry slightly different connotations!

I have two large windows in my room. One is east facing, one south, so the sun tracks round from mid morning to mid afternoon. Depending on where I sit, I can look out without being seen, or I can let folk see that I’m in. 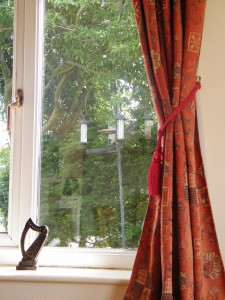 On the sill sits a little Irish harp, made from peat, a souvenir from a holiday in Co Wicklow. 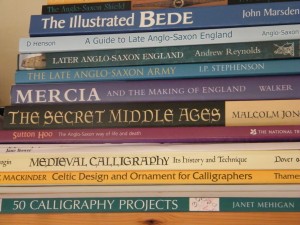 When I’m writing, I sit facing my lovely high shelf of reference books, under which sit the piano, guitars and cello, all of which I use in my other life as a freelance pre-school and primary music teacher. The picture to the left of the piano is a print which I inherited from my grandfather and depicts a medieval knight kneeling in supplication. It was one of a pair, (the other shows a holy man in similar pose on a hill above Rhodes) and they were always referred to as the “de Medici” prints, but I can’t find out any more about them. To the right of the piano is a Celtic ‘dog’ sculpted in metal – a Christmas present from Mr W, many years ago.

When I first began writing in here, the internet was not in its infancy, but more of a truculent toddler, accessible via a dial-up modem. It’s been impossible until recently for me to have a connection in this room. Nowadays I have my old faithful laptop, where I write, and my little chromebook which connects me to the outside world, sometimes. (This cave, you will recall, was an extension, and the signal has to reach through an outside wall from Mr W’s office which, sensibly for all other purposes, is at the other end of the house). The great god “Wifi” often fails to hear my prayers. 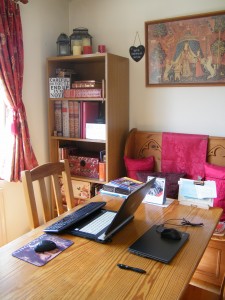 If I want to, I can shut the door, but I prefer to keep it open, so that I’m aware of any passing humans or felines. Being so close in age, my kids pretty much left home in one big bundle, so I’m grateful for company in any form!

To Be a Queen is the result of my finally putting my history degree to some use. It begins in 9th century England and tells the story of Aethelflaed, Lady of the Mercians. She was the daughter of Alfred the Great and the only female leader of an Anglo-Saxon kingdom:

Born into the royal house of Wessex at the height of the Viking wars, she is sent to her aunt in Mercia as a foster-child, only to return home when the Vikings overrun Mercia. In Wessex, she witnesses another Viking attack and this compounds her fear of the enemy. She falls in love with a Mercian lord but is heartbroken to be given as bride to the ruler of Mercia to seal the alliance between the two Anglo-Saxon kingdoms. She must learn to subjugate her feelings for her first love, overcome her indifference to her husband and win the hearts of the Mercians who despise her as a foreigner, twice making an attempt on her life. When her husband falls ill and is incapacitated, she has to learn to rule, and to lead an army in his stead. She must fight to save her adopted Mercia from the Vikings and, ultimately, her own brother. 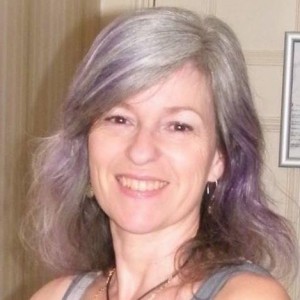 and you can buy my book Here

Thank you, Georgia for allowing me to talk about my ‘cave’

You’re very welcome, Annie. It was an absolute delight having you on!