You are here: Home / Dressed for Drama! 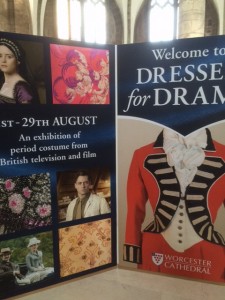 Tipped off by writing pal and ace writing tutor Alison May, I went along to see this at the weekend.

Curated by Worcester Cathedral, it’s an exhibition of costumes made for recent film and TV period dramas. On display are 30 or so costumes from productions ranging from Wolf Hall to Mr Selfridge. They are arranged in chronological order around the walls of the cathedral’s Chapter House (in itself a fascinating space and where 12th century monks met each day to read a chapter of the rule of St Benedict).

I’d seen most of the TV dramas featured and now have at least two big screen films on my ‘To be Watched’ list. The costumes are on stands slightly higher than head height but aren’t behind glass or a barrier of any kind. This means you can get really close and admire the detail.

They are, quite simply, gorgeous.

The notes accompanying each costume make you fully appreciate the detailed thought processes which go into making each one. Such skill and talent needed. It also highlights some of the compromises which have to be made when balancing historical accuracy against the demands of making screen drama.

You probably remember the World War One drama, The Crimson Fields, which was on the BBC? This is Kitty Trevelyan’s nurse’s uniform. Costume designer Ros Little explained that the outfit isn’t completely historically accurate; the blue linen chosen for the blouse ‘popped’ better on the small screen and the red cross is positioned on the sleeve rather than the bib in order to be less distracting. There are faded brown marks on the hem of the apron – the sort you get when bloodstains are put through the laundry and which haven’t quite come out. Amazing attention to detail. 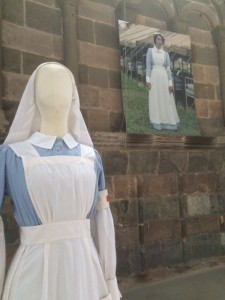 I was a huge fan of Mr Selfridge. Who’d love an excuse to party in this little number? It’s a Dolly Sister showgirl costume from series four. I got into conversation with the very delightful woman who was standing guard. We tried, in vain, to figure out how you got into it. As we talked, she let slip her husband, as an officer, danced with the queen in the years just after World War Two. Apparently, none of the men enjoyed dancing with Princess Margaret, as she was a bit of a gossip. Never tell a writer anything as it’ll turn up in a book – or a blog! 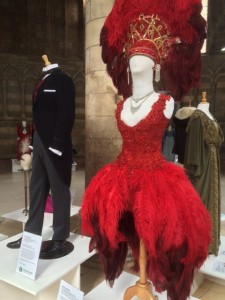 Being able to get really close to the costumes meant you could see the work which had gone into them – and also to see the back of the dresses. This is one of Lady Edith’s dresses from Downton Abbey. I’m fascinated by the years 1900 to 1920 as so much changed – one reason I write about the period. Fashion changed radically during that time too. This dress, from series one and dated about 1912 has a very different silhouette from one which would have been worn twenty years earlier. It’s exquisite. High-waisted, it’s made from green chiffon and silk, with a bodice encrusted with pearls and beads. Just look at the detailed back. 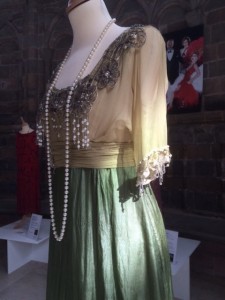 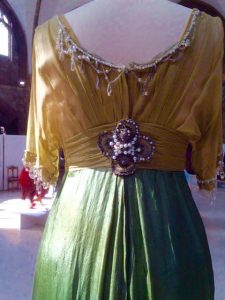 Also from Downton is this beautiful evening gown made for Lady Grantham. It’s made from a dusky pink and gold silk. As the afternoon light filtered through the ancient Chapter House windows, it picked up the iridescent gold on the skirt. 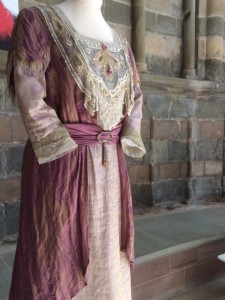 This ballet dress is from a pivotal scene in The Danish Girl, a film I must see. The shoes were stunning. 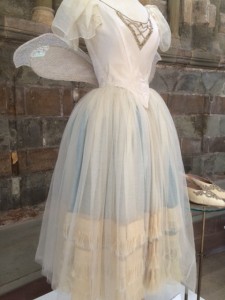 This one was attracting a great deal of interest. It’s one of Ross Poldark’s costumes. Designer Marianne Agertoft explained the lines for men’s clothing in the 1780s were elegant and simple, with the emphasis on a face framed by high collars. A lot of thought had to go into the colours chosen. Not only did they have to suit the actor, they also had to work with the sets and locations used. I love men’s clothing from this era. You’ve got to admire a cutaway jacket and a pair of buckskins. However, the enormous picture of actor Aidan Turner may have had something to do with the crowds this costume was attracting! 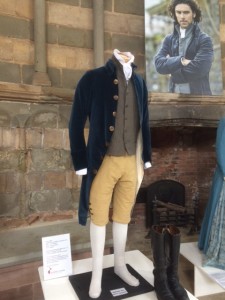 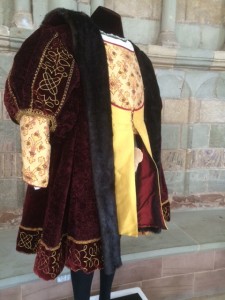 My favourites were these two. You might have caught The Scandalous Lady W on BBC2 last year. Here’s Lady Worsley’s striped green redingote or overdress and her military style riding habit. The red wool of this jumped out at you the instant you entered the exhibition. It’s based on the regimental uniform of the Hampshire Militia circa 1776, to which her husband belonged. Guaranteed to make you the centre of attention. I just wish there was an excuse to wear something like this in 2016! 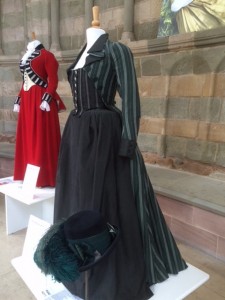 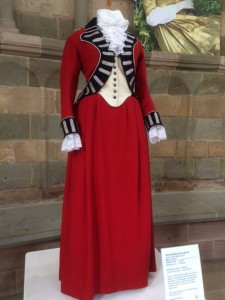 Dressed for Drama, which is part of the Worcester Festival, runs until August 29th and entry is £6.50. It comes highly recommended.