You are here: Home / Ghosts, ghoulies and a Hamburg art gallery.

‘There are more things in heaven and earth, Horatio,
Than are dreamt of in your philosophy.’

So said Hamlet, who had just cause to say so, as the ghost of his father had just appeared before him.

Before Christmas, on a bitterly cold Sunday afternoon, I had the pleasure of listening to Barbara Erskine speak at the Hay Winter Festival. I tend to prefer the Winter Festival as it’s more low key and not as corporate as the main one in May. 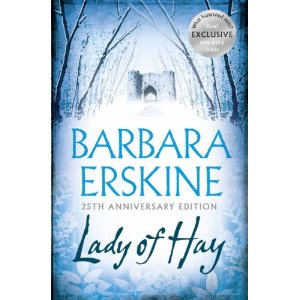 Ms. Erskine was in conversation with another favourite author of mine, Phil Rickman. My husband tagged along, expecting to be bored but we were both riveted by the turn in conversation. Expecting a promotion of the writers’ latest books, we were surprised that the talk was all of haunting and things beyond the natural.

Barbara told us all about the various ghosts which share her house. Phil expounded on a moving and slightly creepy tale of a spirit visit of a dear recently departed friend, who appeared in the shape of an owl.

Other matters were touched on but we kept returning to the fascinating subject of the paranormal. Members of the audience were encouraged to share their own experiences and one man had an extraordinary story to tell. I’ll call him Sam.

Some years ago, while on a visit to Germany with an artist friend, Sam visited a gallery displaying Italian Renaissance paintings. One showed the image of Christ being lowered from the cross, with Mary and Mary Magdalene in grieving attendance.

He went closer to study the painting and noticed three people in similar rapt attention. They caught his eye because they were of Mediterranean appearance and stood out from the blonde northern German types in the gallery. As he got nearer to them, his fascination quickened. The faces of Jesus and the two Marys in the painting were the exact mirror of the three people who stood in front of it! Not believing what he was seeing, Sam called his friend over. He agreed that the three dark haired, sun-tanned people standing in front of the Deposition appeared to be the same as the ones in the painting. When the trio moved off Sam and his friend, trying to summon up the courage to speak to them, followed. ‘Jesus’ and the ‘Marys’ went through the tea room, into another gallery and were lost to view. There was only one way out of that room; back the way you had come. But when Sam and his friend pushed their way through the crowded tearoom and into the room beyond, it was empty. The mysterious trio had disappeared!

The whole audience was electrified as we listened to the story. I know at least three people in the room were busy with their writers’ heads going clickety-click and storing away the snippet for a future plot!

Make of it what you will but it opens up some fascinating ideas. What if the people used as models could step down from the paintings in which they are depicted and walk amongst us? What if the characters themselves walk among us? Does that mean Christ was in a Hamburg art gallery that day? Was it three artist’s models that transcended the time slip? Or was it simply a group of Italian tourists?

One recurring theme of that cold afternoon at the Hay Winter Festival was that many people have had strange, inexplicable things happen to them – I know I have – but are often unwilling to share them.

Maybe Hamlet was right all along. And maybe, just maybe, there are more things on this earth than can be explained away purely by science or logic.