You are here: Home / Budleigh Salterton Literary Festival Part One 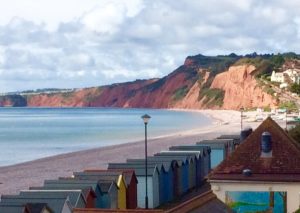 As I’d missed my usual visit to Hay on account of moving south, the chance to get to a literary festival was too good to miss.

I’d wanted Paula Byrne’s talk on Jane Austen but it was fully booked. Another session titled Writing the Past caught my eye so I went along to that instead. 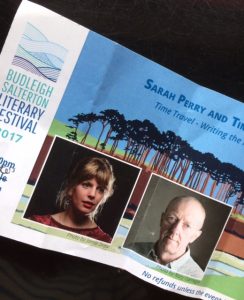 In a casual interview format, writers Sarah Perry and Tim Pears answered a range of questions about writing historical fiction.

Both researched but in different ways. Sarah writes a scene and then researches the necessary detail. For her, plot very much informs the need for what research she has to do. Tim called on his childhood memories and read memoirs of Edwardian childhoods.

For both, a sense of place was crucial to their writing. Tim was brought up in Devon and used what he remembered. Sarah saw place very much as another character in her book. She wrote it in real time, so wrote about January in January. She very much saw writing The Essex Serpent as a deliberate reclaiming of her home county, away from fake tan and handbags, to its legacy of history and mythology. 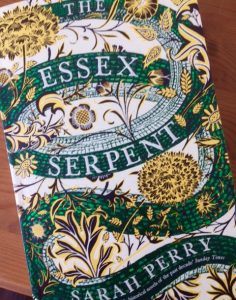 There was some discussion about how difficult it is to get the language right and especially historical colloquialisms. Sarah used the example that the London underground was originally known as the tube, even though, to our ears, this sounds a horribly modern term to be used in the 1890s. Tim had a dilemma about what to call the sea front in Penzance. He wrote it as ‘esplanade’ as that is its name, only to discover locals called it the promenade. Both agreed there is always someone out there who is only too happy to correct any mistake!

Sarah Perry came across as hugely intelligent, composed and frighteningly articulate. When she read out part of her book, it made me want to give up, as it was so beautifully written. It was a shame then, that she slipped in casual and derogatory references to ‘bodice-rippers’ and ‘sappy romances’ when talking of her fears for the forthcoming television adaption.

On being asked how she drew readers into the moment she stated that everything serves feeling. That how a character reacts or sees a window, to use a simple example, depends on how that character is feeling and not what the window looks like.

Gold dust, I thought and scribbled the little nugget down. In the car on my way home, though, it occurred to me that those of us who write ‘bodice rippers’ and ‘sappy romances’ have always done that. For romance writers, emotion is always uppermost and key to all we write.

Maybe the literary world has something to learn from romantic fiction? But I bet it’ll never admit it!