You are here: Home / RIP my best friend 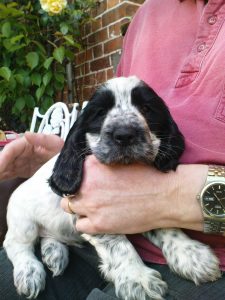 Bertie was our first dog. I’d always wanted one but timing and lifestyle was never quite right. When it was, I researched breeds, whether or not to get a rescue and eventually decided on a cocker spaniel puppy.

Bert was the first-born and the biggest and greediest in the litter. I viewed his mum and the other puppies for the first time when they were three weeks old. When I picked him up, he snuggled into me and I knew he was the one.

We saw him again at five weeks and he ignored me, preferring to chomp on a rose bush! I should have taken the hint; our garden was never the same after his arrival. 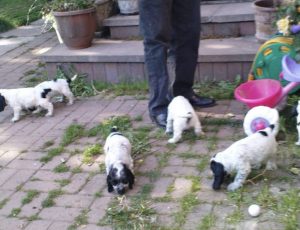 Owning a puppy was hard work. We were exhausted. Those in the know say it’s akin to having a newborn baby. As we’d never had children, we didn’t have a clue. Sleepless nights. Regular feeds. Toilet training. It was all new to us. It helped when our neighbour said something early on. It was something like, just because a dog is what you’ve always wanted, it can be a shock to the system and you don’t fall in love straightaway. It lessened the guilt I felt at not enjoying the experience completely. After all, I’d got a much longed for puppy. Why wasn’t I ecstatic? It took two weeks before I fell in love with Bertie. He was still exhausting, occasionally infuriating and hard work but I was devoted to him.

We attended a few training classes and once, inadvertently, a ring craft class. He wasn’t the best-trained dog in the world but he came when called, knew leave and sit, which was about all that was required of him. Bert considered his calling in life was to be admired – by all. 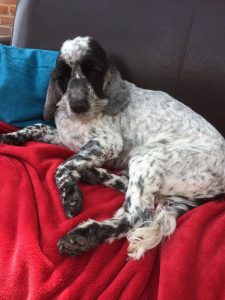 And he was. He won everyone over. When we were socialising him to town noises and were walking him along a high street, a woman rushed out of a shop to give him some fuss. Bert took it as his due. He had a predilection for young, blonde-haired women. Sitting in a beer garden with him, watching different types of people going past (more socialization) he ignored the biker with his beard and sunglasses, the little boy running past, the bloke with a hat talking loudly into his phone. However, when a young blonde woman in shorts and t-shirt went past, the tail began wagging and the ears went up – as much as spaniel ears ever do go up. And when Bertie wagged his tail, his entire bottom wagged with it!

He was mischievous but then all puppies are. Hard at work in the study, I should have realised silence wasn’t always a good thing. When I looked up from the computer and across the landing, it was to the sight of Bert looking proud that he’d disembowelled the duvet off the spare bed. 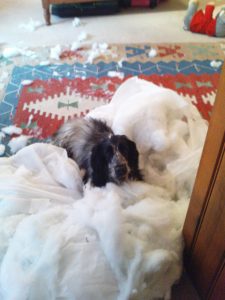 Bravely, we took him on holiday when he was just over a year old. All week I walked him along a nearby river, keeping him firmly on the lead. On the day we were due to leave, I chanced him off the lead for the last five minutes. After all, we’d walked the route for six days, he knew it well enough. He ran straight to the river and jumped into the muddiest part. Towelling him off was treated as the best kind of wrestling game and we suffered wet dog smell in the car all the way up the M5.

As well as food, his other love, which he never really grew out of, was shoving his long and elegant nose into handbags. He once attacked a Sainsbury’s bag and ate half a loaf before I’d even got the rest of the shopping out of the boot. 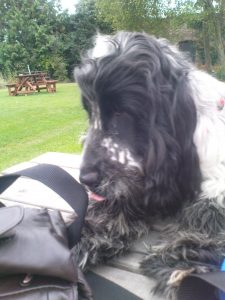 When he began to slow down a little we thought nothing of it. He was getting older after all. And he’d always been wilful and made no secret of when he’d had enough on a walk. Sit down protests were a speciality.

Not long after we’d moved house, I rushed him to the vet with what I thought might be some kind of respiratory illness. The diagnosis was devastating. Bertie was only seven and a half but we were told he had congestive heart failure. It was mid-December and the vet warned us he might not make it through Christmas. The condition was life affecting and life limiting.

As it turned out, we kept him going for twenty months. He enjoyed gentle walks, a complicated and expensive regime of drugs and was spoiled rotten. 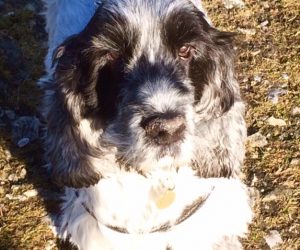 The decision to put him to sleep was the hardest I’ve ever had to make even though it became clear it was absolutely the right time. We had him in our lives for over nine years. I’d hoped we could have had him for longer. But it was not to be.

Like many people, I’ve experienced the grief of losing those closest to me. I can honestly say the grief I feel for Bertie is on a par. Maybe it’s because the relationship you have with a dog is simple. They expect nothing from you but food, a walk, a good tummy rub and your time.

It’s been a tough few weeks. Bertie was my shadow; he never left my side. He had a makeshift nest in the corner of my study and slept on the end of my bed. He understood every word I said and obeyed what he chose. He’s left an enormous gap and my arms ache to hold him.

One day I hope to look back on Bert’s time with us and remember the good moments, the many times he made us giggle. I’ll look at photographs without crying. I might even consider getting another puppy. I haven’t quite got there yet.

PS If you’re going through something similar, you might find this book helpful. I did.