You are here: Home / Spring cleaning anyone? 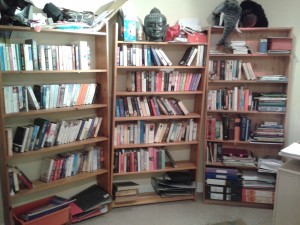 The books look tidy, now I need to sort the mess on top!

The birds are singing, the days are lengthening. There is the merest hint of Spring in the air.

I’m not one for housework. I apply the adage: only boring women have immaculate houses but even I was getting frustrated about the enormous pile of unread books in the bedroom. They were covering every surface and gathering handkerchief loads of dust.

Something had to be done.

Looking at the groaning bookshelves in the study, it became clear there was no more room for anything on there.

Bookshelf bought and put together by my very kind husband (apparently Dog Number Two helped by getting in the way and pinching the screws). I then had to squeeze it into a gap along the study wall. Easier said than done, as my study has round walls. Wide pieces of furniture just don’t work; they leave gaps behind between the straight line of the furniture and the curve of the wall. But, unless I commission custom made furniture (and I’d have to sell a  lot more books before that can happen) I have to put up with it. Narrow but tall is the way to go.

A bookshelf was eased into place, alongside two others, proportioned as aforementioned. Then came the joyous task of moving books along to make more room for the others.

On the way, I dusted down the shelves and the books, until Dog Number Two decided to step in and nab the duster.

It took ages as I kept getting distracted by the books. Such temptation to go and lounge on the sofa and read a forgotten gem. But I didn’t! I persevered.

The result? Three organised, dusted (mostly) bookshelves, with space for some new additions on each shelf. Extremely satisfying.

I mentioned the gap behind any furniture I put in this room, didn’t I? It caused one or two problems. When I got too ambitious and tried shifting an armful of books along a shelf to make room for those earlier in the alphabet, some authors refused to co-operate. Eloisa James was determined to jump off at any opportunity and the less said about the antics of Julia Quinn’s Bridgerton series of novels, the  better! They kept sliding to the floor. And one Lucinda Riley novel, obviously wants to be read – it just wouldn’t stay in place.

The re-organisation also threw up some interesting combinations. JoJo Moyes is next to Julia Quinn. Lucinda Riley is leaning on Phil Rickman. Clare Chambers is nestled up to GK Chesterton and Sebastian Faulks is now all cosy between Harriet Evans and Judy Finnegan!

It gave me a real sense of satisfaction at the end – and made me promise I would not buy any more books in print until I’ve read every one I currently own.

But, then again, there are those lovely spaces on each shelf just begging to be filled with a new novel!

Anyone got any recommendations?