You are here: Home / The world is ready for a Mary Stewart revival!

The world is ready for a Mary Stewart revival!

Want feisty heroines? Smouldering men? A good plot and excellent characterisation all set against an atmospheric background? Try a Mary Stewart novel. Those in charge of commissioning television drama, glutted as it is with Jane Austen and Elizabeth Gaskell, take note.

To feed my current King Arthur obsession, I was given Lady Stewart’s Merlin trilogy as a present recently. I’ve never read them but am a huge fan of her writing, especially her lesser-known romantic thrillers.

The ones I particularly enjoy are the books set in Greece; in fact, they were the sole reason I wanted to visit the country. Mary Stewart’s love affair with classical Greece infected me with a desire to visit myself. I still haven’t seen Delphi, as featured in my all time favourite novel of hers, My Brother Michael, but intend to follow in the heroine’s footsteps someday. 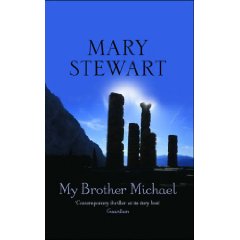 Most of the early novels wear their romance lightly. In This Rough Magic, the lovely Max and Lucy share a passionate embrace in the sea after rescuing a dolphin but that’s about it. Mary Stewart dabbled with sex in the books she wrote in the sixties but again, it’s all done with the lightest of gloss.

They are hopelessly dated now but that’s their strength. Plucky heroines and dapper heroes dance around with manners straight from a glamorous just post-war Britain flirting with the concept of foreign travel. In one of Mary Stewart’s first novels, Madam, Will You Talk? the heroine Charity is forced into a thrilling car chase across Provence – in an Austin Riley. She’s pursued by the (literally Byronic) ‘hero’ in a plot involving Nazi atrocities. And in 1955, when the book was written, this was a recent occurrence and not a distant memory.

And Mary Stewart does wonderful characters! Fully rounded, literate, plucky heroines, who rely on uncrushable, easily washable man-made fabrics to see them through all sorts of scrapes. She writes some truly marvellous heroes too. Simon in My Brother Michael is my favourite; a man who hardly raises a sweat or an eyebrow but you just know there are deep emotions hidden away. Max in This Rough Magic is a musician with a ‘navvies’ body and the hint of the neurotic about the mouth. Later heroes are beautifully written too – such as the shy country boy, with the intriguing secret, in the hugely engrossing Touch Not the Cat.

Their very dated quality is what I believe would make such wonderful television. Think of those gloriously stylish fifties and sixties clothes and cars! Mary Stewart’s novels always have a very strong sense of place too, whether it’s mainland Greece, Corfu or the Isle of Skye. You can feel the clogging rain of a Scottish island or the searing heat of a Greek one. And you can sense the presence of the old gods amongst the lemon-flowers in the Cretan hillside.

While they are unashamedly populist and entertaining reads, they are literate books too. Featuring quotes from Keats or a discussion on exactly where Shakespeare set The Tempest. My ancient Coronet paperbacks are battered and falling apart from constant re-reading. And each time I do, I find something new – surely a sign of a well-written book?

Go on people who produce telly, make my year, adapt a Mary Stewart novel. It could be a real ratings winner!