You are here: Home / Mr Darcy Loses the Plot 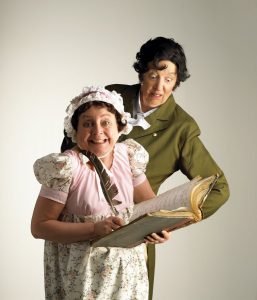 Spotted the title,  pressed “buy ticket” on the laptop. Who could resist something called Mr Darcy Loses the Plot? Another promising night at the theatre beckoned.

Mr Darcy, in the middle of being written by Jane Austen, takes umbrage at her allowing Wickham to get the girls and have all the fun. He also takes offence at the book not being all about him. He’s a man, of course the book should be about him! And, as we know, taking offence is one thing Darcy is really good at. Off he goes, petulantly sliding into the plots of other books written by women. He ends up in Rebecca and Mary Barton. In one surreal episode, even Beatrix Potter’s Jemima Puddleduck makes an appearance. Eventually, after one accusation of murder too many, he decides Pemberley House in the county of Derbyshire is where he wants to be and all is well.

What, on the face of it is a simple premise, develops into a glorious parody of some much-loved books and a sideways look at the themes which run through them. All underpinned with a running commentary on the difficulties women have to face while trying to write. Dear Reader, I related to that bit, although, in my case, it’s normally only two needy spaniels who are after something. 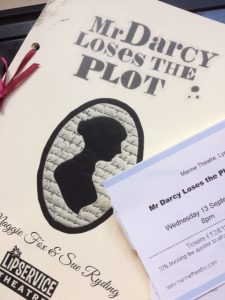 It helped if you knew the books but, if you didn’t, you could just sit back and enjoy the lunacy at face value. If only North and South had featured (another haughty Darcy-type character there) and not Mary Barton, my evening would have been complete. The staging added huge comic appeal. I won’t say anything more as it will spoil the jokes. Suffice to say, the staging of Darcy and Elizabeth’s dance was sheer genius. I laughed. A lot. It was all great fun, very clever and slightly bonkers. Just my sort of thing. 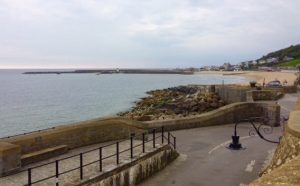 It was another trip to the little theatre by the sea, the Marine Theatre in Lyme Regis. A wondrous place of which I’m a big fan. I loved Mr Darcy Loses the Plot. LipService Theatre, please come back, I’d love to see Withering Looks!

Mr Darcy Loses the Plot is touring venues throughout the UK this autumn. Recommended.